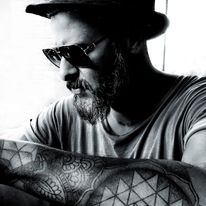 Born and raised in Dubai, Aji Mon Nair has been explosive within the underground DJ & producer scene for the last decade.

Beginning in 2001, Aji was the resident DJ for Virgin Records Megastore in Dubai and found his stride with his original Progressive sound in 2015, gaining hefty support from heavyweights Above & Beyond on their Group Therapy radio show, as well as other big names such as Solarstone & Paul van Dyk.

Within the last two years, he has been focusing on searching for new sounds and inspirations in the underground parties of Goa & Varakala in India, cutting his teeth on many gigs and festivals, including Offbeat Kerala Festival, which attracted thousands of dancers with his powerful set. He has also performed in Thailand in Kho Phangun with their esteemed Full Moon Parties.

Through those last two years, his sound has become more mature and refined, zeroing in on influences from DJ visionaries such as Maksim, Cosmic Connecktion, Christian Craken, Breger and Carbon & Lampe.

Currently, he has turned his attention on the intricate and trippy work of Minimal Techno and Tech House with twists of funk and hypnotism. He also has gauged an interest in Melodic Techno for more of a ‘daytime’ point of view within his sets.
Emboldened by this new avenue of sounds and textures, he has released a number of recent tracks on established labels of Souperb Records; (Ash Roy & Calm Chor), Phobos Records & Evil Flow with an emphasis on experimental sound design within a back drop of slick, sub bass focused orchestration. This of course has also transitioned into his excellent experience in track selection and energy manipulation for his energetic, ‘heads down’ sets for peak time and emotionally charged melodic techno sound for the day.

Currently based in Mexico, Aji is earnestly looking forward to the continuation and evolution of his sound in both DJ sets and production, as well as being a reliable, phenomenal artist for shows and festivals around the world.