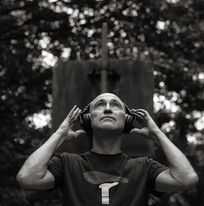 It was New Wave and Alternative Rock that drew Digmin into the underground music scene and still today, both styles of music inspire him a good deal. In 1995, electronic music revealed itself at Brussels’ old school club ‘Fuse’ and techno was glued to his musical taste. An amazing set played by Hernan Cattaneo at Liverpool Cathedral in 2011 was the real eye-opener: electronic music and Digmin’s musical background could be merged. It was called Progressive. Right there, electronic music turned into a passion.

In 2017, this passion finally turned into the first steps of creating a sound of his own. He started by listening obsessively to tracks and taught himself to mix a set. Well-known producers or small, unknown labels, it didn’t matter at all. Tracks simply have to resonate with those emotions he wants to express. From dark and gloomy to warm and hypnotic, he is looking for that exceptional sound. A sound that embodies his craving for deep underground music.

A couple of months later, he shared his first sets on soundcloud with progressive house. Many more followed with the accent on progressive and later also on melodic Techno. No expectations or blind ambition, just sharing his love for great sets that carry you along to deep, ecstatic, and mind-shifting sensations.